Are you worried the fuse box in your house is too old and no longer complies with electrical UK regulations? Is it time to replace it with a more modern consumer unit? How long is it going to take and more specifically, how much is it going to cost?

Read on below and you’ll find out all the answers to these questions, including what is involved in the replacement process so you can make the right choice for your household. 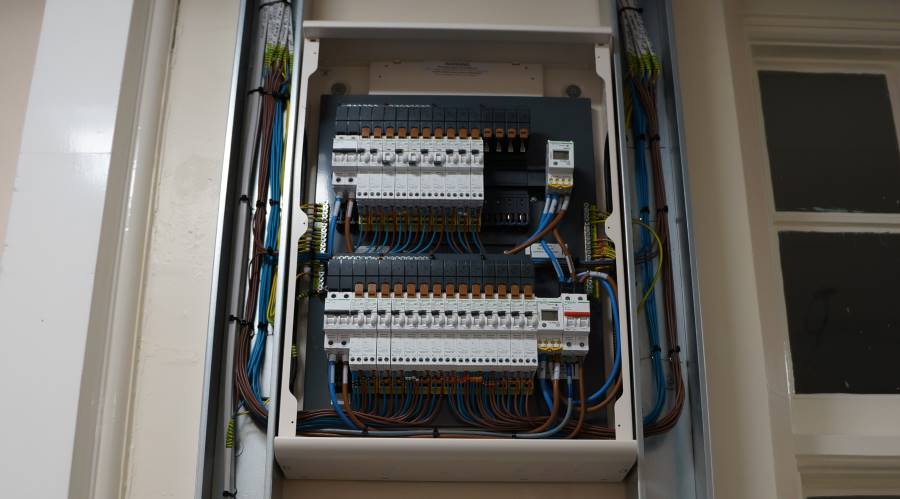 LOOKING FOR A QUOTE OR MORE INFORMATION?

If you need help with consumer units in Carlisle, Cumbria or South West Scotland or want a FREE on-site survey with no obligation quotation, then please call us today on 01228 380845 or visit our contact page and submit an enquiry, we will be more than willing to help.

GET IN TOUCH
What is the difference between a fuse box and an electrical consumer unit?

A fuse box and a consumer unit serve the same purpose. They distribute electricity in your house through multiple circuits and instantly turn the power off whenever a power overload occurs on one of the circuits, which is commonly known as “tripping”.

A fuse box uses fuses instead of circuit breakers. Each fuse contains a wire which will melt if there is an electrical overload and make the circuit trip and switch the power off.

It is not as easy to identify a faulty circuit when using a fuse box and the, now melted fuse, will need to be replaced before the power can be restored. Consumer units are basically the modern and safer version of fuse boxes which in most cases are no longer compliant with current electrical regulations. If your house is fitted with an old fuse box, it might be time to for you to replace it.

How do I know if I have an old-fashioned fuse box?

It’s very easy to tell if you have an old-style fuse box or a more modern consumer unit.

An old-style fuse box will have a series of fuses contained inside fuse carrier which you can manually remove and replace when one of them goes off following a power overload.

A consumer unit however, will be made of a horizontal row of what is known as MCB (Mini circuit breakers). Each MCB will have a switch which can go off in case of a power surge.

Which consumer unit is right for my house?

This type of consumer unit only has one main switch from which all circuits in the house can be swithed off. In case of a power surge the main switch will trigger itself to the position off, along with the toggle of the faulty circuit. This is a very popular choice, especially for single storey houses and small flats.

A dual RCD (residual current device) consumer Unit offers the ability to split load the power over two sets of circuits, RCD1 and RCD2. The advantage of this consumer unit is that it is possible to alternate the circuits so the power can still be available in some part of the house if one of the RCDs is no longer operational. This is ideal for multiple storey houses.

High Integrity consumer unit have become a very popular choice over time as they offer the ability to separate all circuits independently. So while your freezer may stop working, everything else will continue working without interruption.

How much does it cost to replace a fuse box or electrical consumer unit?

The costs of replacing a fuse box or upgrading a consumer unit to a more recent one can vary greatly as it will depend on many factors such as:

It is best to speak to us first to get a free quote.

A typical replacement (Labour and part) will cost between £250 and £450 and will include:

The quote in this example does not include the earth & bonding check which need to be carried out before the replacement takes place. The Earth and bonding inspection will establish if there are any fault in the existing installation which need to be addressed before the fuse box can be replaced.